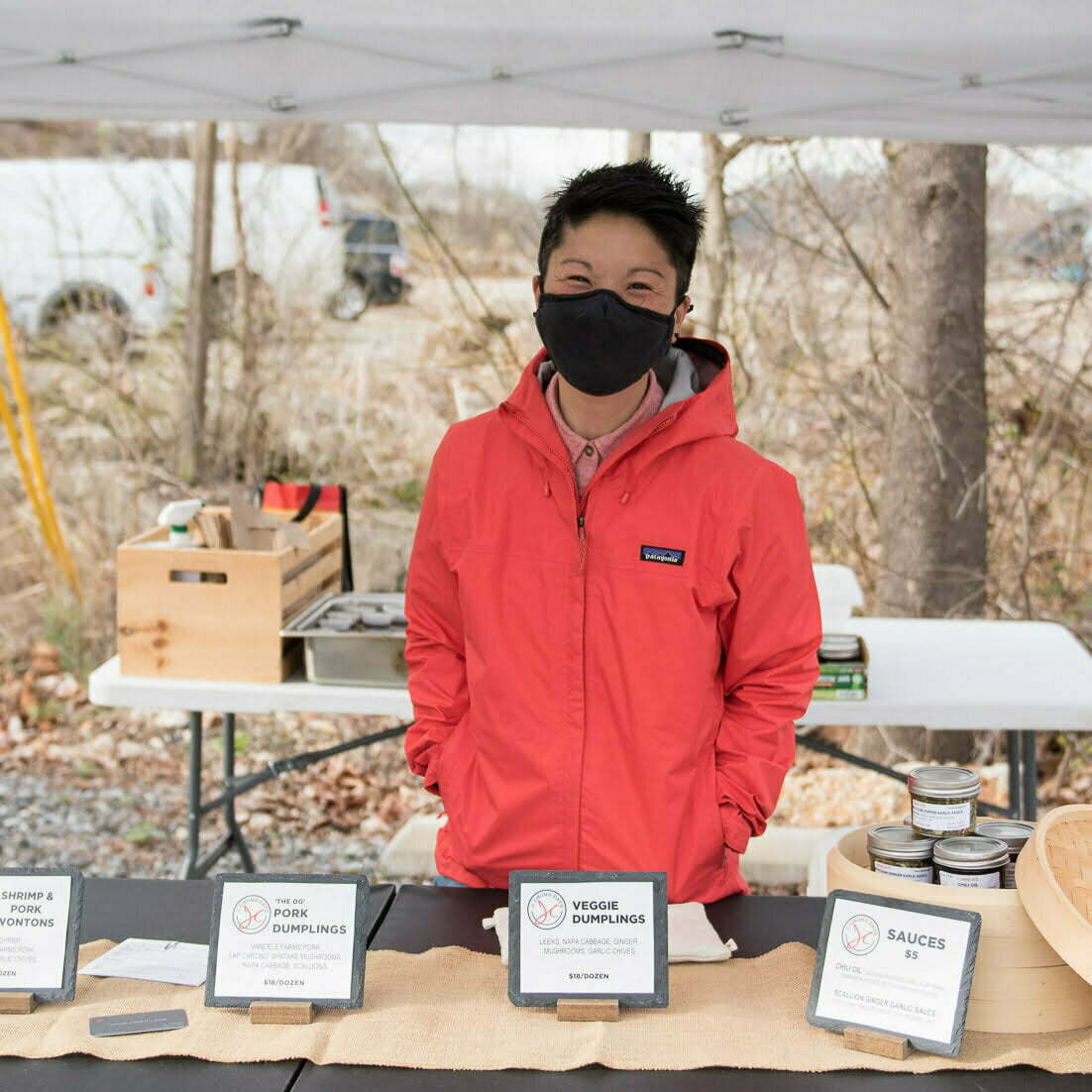 Spring has sprung in Western North Carolina and farmers markets are going through a transformation. Farmers are bringing their early crops of radishes, lettuce, turnips, and spring onions to market and everyone from shoppers to chefs are excited.

J makes frozen dumplings and Cantonese chili oil that she sells at multiple farmers markets. She also offers private dinners and cooking classes where she introduces people to the joys of seasonal eating. She sources the pork in her dumplings from Vandele Farms and the vegetables in her vegetarian dumplings change based on what’s available at that time of year.

“Depending on what I can get, the vegetables vary. Right now I’m using Napa cabbage. I’m not sourcing locally yet, but it’s starting to become in season so I’m going to hit up some farmers to get that because Napa cabbage is actually in two of my dumplings,” she says.

As more produce comes in season, J won’t have to search for local vegetables. Whether she’s sourcing produce for her dumplings or buying veggies to cook at home, all she has to do is walk over to a nearby booth and chat with the farmers – like the folks from Ten Mile Farm.

“At the Saturday market, I’m directly across from Ten Mile and I just love to see weekly what they have,” she says.

J says radishes have been the most exciting addition so far.

“They’ve recently gotten a bunch of radishes, which I’ve purchased a few times, and it’s anywhere from local daikon to watermelon radish to black radish,” she says.

Those radishes open up a rainbow of possibilities in the kitchen, especially when J draws on her Cantonese background for inspiration.

JC: If you were to eat beef and broccoli or something like that, I substitute the radishes for the broccoli aspect and it just gave a little more peppery flavor to the dish. It really made the fermented black beans come out a little more,” she says.

J’s professional life has revolved around food for years, especially when she was executive sous chef at Cúrate, but she still enjoys cooking at home.

“I cook every day, probably for every meal. To be honest with you, if I wasn’t married, I don’t think I would be cooking as much, but I feel that because I’m not only having to cook for myself, but I’m cooking for someone else, that I should cook on a daily basis. I could just live off of snacks all day and just grind through, but because I have a family, it forces me to cook on a daily basis. I enjoy it, so it’s a good thing,” she says.

Going to farmers markets to shop for her family and sell dumplings has been a lifeline for J during the pandemic.

“During covid I was limited with contact and face-to-face conversations. I think that the farmers markets kind of saved my life in that way. Because I’m such an extrovert, the markets gave me a chance to speak to people,” she says.

Those conversations revolve around local food and also issues affecting the community. Last month, in response to the recent and ongoing attacks on Asian Americans and Pacific Islanders, J donated her Saturday sales to two AAPI organizations.

“I decided to bring awareness to the community, and the only way I knew how to do it is through my work, my profession, and my platform. I think people were really, really receptive to it and appreciative. People want to want to help and people want to be aware and people want to, for the most part, educate themselves. So I think we’re heading in the right direction,” she says.

As people head out to spring farmers markets, J has some advice for folks who want to connect with the community and eat more local food this spring.

“Go to the farmer’s markets and check out what every vendor has. There are so many great creative vendors in town. You could get anything from fresh produce to frozen dumplings or fermented foods. You can get pastries; you could get bread. I just think people should, even if the sun isn’t out, just take some time, walk around the farmers market, see what everybody has to offer and kind of just be creative,” she says.

Find the opening dates and hours of spring farmers markets, and the locations of year-round markets throughout the region, at www.asapconnections.org