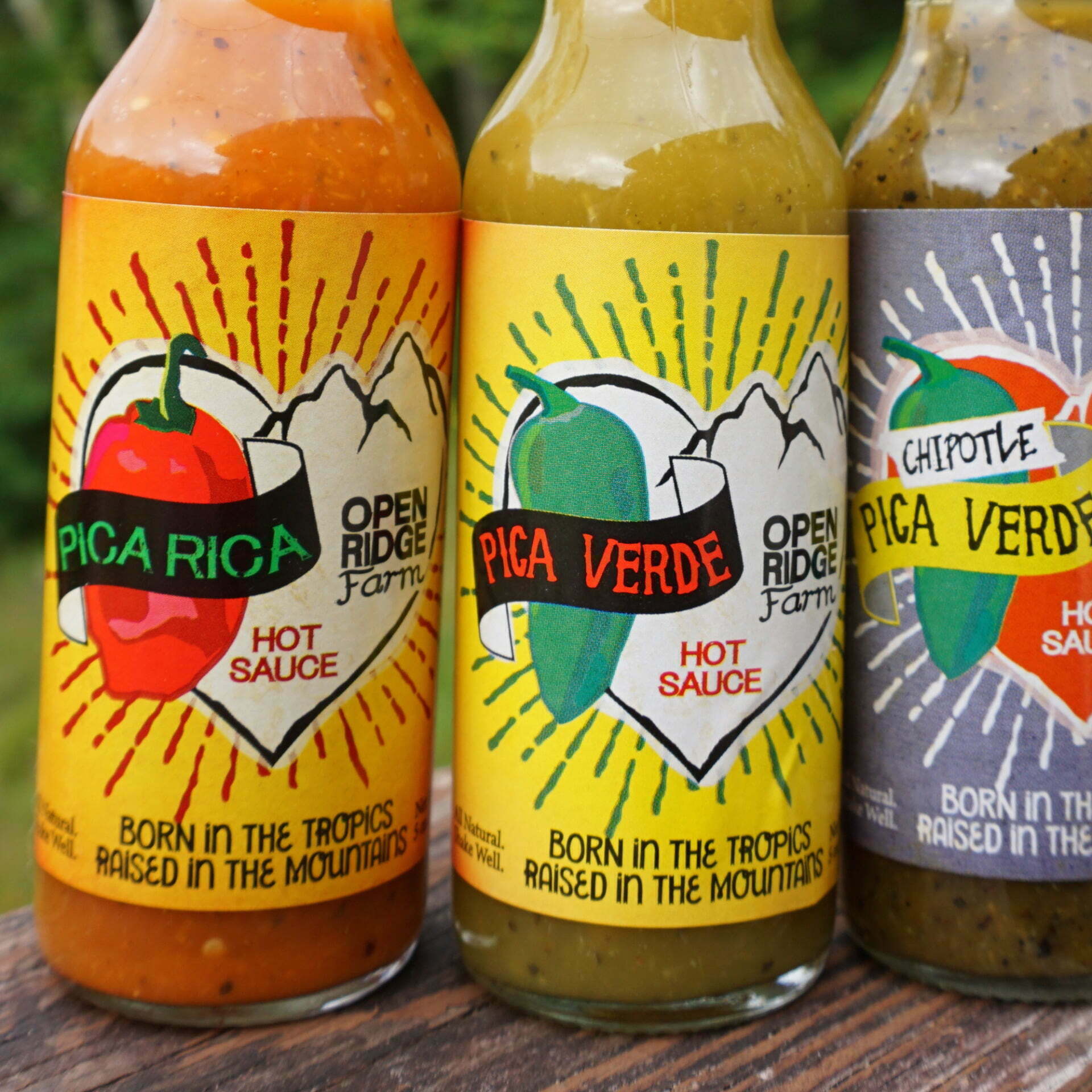 Jona Felts and Gretchen Ferrell grow a little bit of everything at Open Ridge Farm in Yancey County, North Carolina. “As a diversified farm, we grow annual vegetables from A-Z, from asparagus to zucchini,” Jona says.

When customers drive up to the farm at the base of Mount Mitchell, they can see exactly where the produce in their CSA box is grown. “It’s very common for us to still be working in the production area when pickup time arrives. It’s not uncommon for a pickup customer to wander down into the field just out of curiosity sake, to see what we’re doing or to check it out or to comment on it,” he says.

When customers look out onto the fields during the growing season, they see rows and rows of hot peppers. Open Ridge uses several varieties in its hot sauces, which allow the farm to preserve its peppers and sell a product year-round when it’s too cold to grow vegetables outdoors.

The hot sauces are hyperlocal, but the inspiration came from much farther away. “I moved to Costa Rica and I was a volunteer coordinator at a sustainable agriculture farm. That is where I started playing around with creating recipes for hot sauce,” Jona says.

The farm where he worked was an ideal place to grow hot sauce ingredients. Jona says that like a lot of good inventions, the hot sauce was created out of necessity.

“We not only grew a large collection of tropical fruit, we were also self-sustaining, growing our own vegetables. The climate was really conducive to the growth of hot peppers, so we were presented with the challenge of a large amount of hot peppers that were perishable that needed to be processed.”

“We also grew black pepper on the farm and produced our own vinegar from bananas and we had abundant citrus. We had primary ingredients onsite to play around with, so this gave me the opportunity to start attempting to preserve our crop through hot sauce,” Jona says.

The hot sauce was a hit, and when it was time for Jona to return to North Carolina, he was determined to adapt the recipe for this climate.

“I still had that knack for growing peppers, both sweet and hot,” he says. “So we took the original recipe that we had developed in Costa Rica and began to adapt it to varieties that grew particularly well in the mountains. So the tropical habanero relatives that we were growing in Costa Rica were translated into a more typical habanero strain. We also added jalapenos, which grow really well in our environment and expanded our product line using the same kind of barebones recipe but exploring jalapenos,” he says.

Making hot sauce might seem pretty straightforward, but they ran into plenty of challenges as they grew the ingredients themselves.

“The first challenge was production and how to deal with our environment. I’ve lived in various places throughout the world in my life, and every site has its specific challenges, be it weather or pests, both micro and macro, insect pressure or the animals that coexist in your zone. Coming to terms with these and developing strategies that are both gentle on the the the fauna and flora that are native to the area, yet allow us to to to make a living doing what we’re doing was the first challenge to overcome.”

The climate and crops were different from Costa Rica, but Jona wasn’t new to being part of a farming community in North Carolina, where he grew up.

“My first crop grown, I was five years old, spitting a watermelon seed in my mother’s flowerbed and sometime later, I realized there was a watermelon plant growing. Both of my parents worked full time, so my babysitters before I was kindergarten age were farmers and I would join them in their various farm activities—ride on the back of the tractor, play on the side of the field while they planted potatoes. They would disappear out of sight, planting one row only to return down the next rows sometime later. So I was just fascinated with their lifestyle as a small child,” he says.

Jona is passing that sense of wonder down to his nine-year-old daughter, who helps out on the farm by doing pest control and showing off produce on social media. Jona says farming with his family is one of the most rewarding parts of his life.

“I enjoy being outside rain or shine,” he says. “From the time the sun goes up till the time it goes down, I’m my own boss for the most part, besides what the crops and the day dictate. I get to spend really quality time with my life partner and my child in an outdoor environment.”

Even with the popularity of their hot sauce, Jona and Gretchen are expanding other parts of their farm. They have a fledgling orchard and they aim to add perennial crops each season; last year they got their first peaches and plums. They also grow pears, hazelnuts, and 16 varieties of apples—all while keeping up with the A-Z vegetables and making hot sauce.

It’s a busy life, but they love connecting with the people who eat their food. “We typically know every customer by name, and they are, by and large, very close community members. We have the opportunity to chat with them and find out more about our customers lives and deepen the relationship between customer and producer,” he says.

Open Ridge Farm sells its hot sauce at farmers markets, local shops, and online. Learn more about it and dozens of other local farm-fresh products in ASAP’s Local Food Guide.