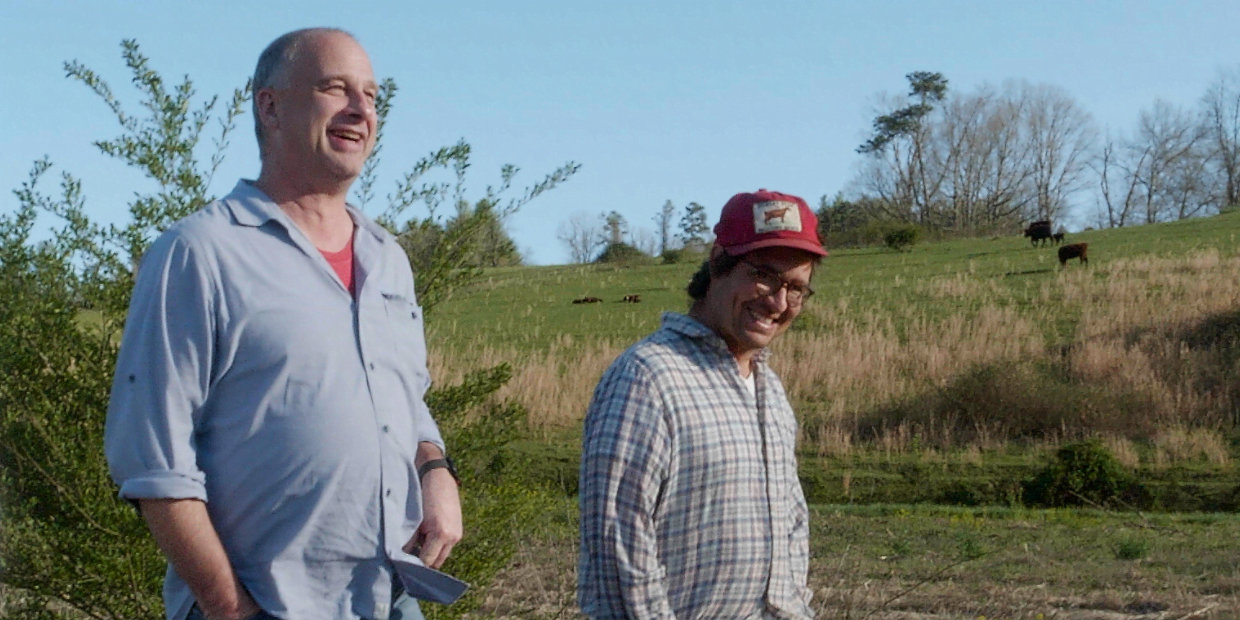 ASAP likes to share the stories of people who help us fulfill our mission. This month we’re talking to farmer Aaron Grier of Gaining Ground Farm along with chefs John Fleer of Rhubarb and Brian Canipelli of Cucina 24 about what has made those chef-farmer relationships so strong over the past decade. (Photo of John Fleer and Aaron Grier by We Give a Share.)

AARON GRIER: Our relationships with John and Brian have been unique from the get go. They have tried to understand and substantively support us. They have a real relationship with vegetable growers. There are a couple other restaurants that are great and get it.

When the pandemic hit, all of our restaurants disappeared, held checks on us. With John and Brian it was, “We’ll sink or swim together.” That was really awesome. When we got flooded [from Tropical Storm Fred], Brian threw a fundraiser and raised money to take heat off us for a little while. John stepped up and covered our CSA customers with gift cards to Rhubarb.

BRIAN CANIPELLI: When the pandemic started I had to let everybody go and try to figure out what to do. Aaron and Anne just started bringing vegetables and wouldn’t let me pay. That meant a whole bunch. Then when floods happened last summer, there was a big blow to them. I wanted to try to make some sort of impact. I wanted to let customers know how important [Gaining Ground] is to my business. We were doing a pretty strong takeout business at the time, so we decided that for a week all takeout sales would go to those guys. A lot of people from community showed up and helped.

JOHN FLEER: I first met Anne and the kids in 2012 when I was still at Canyon Kitchen. I was doing a Blind Pig dinner in Asheville and I asked Mike Moore about connecting me with local produce, because all of my relationships were out in Cashiers. The event was at Yesterday’s Spaces, so I met Anne, baby Cyril and little, tiny Addiebelle in their front yard on the way over to prep for the event. The kids were so cute, I couldn’t resist continuing the relationship. Of course the produce was amazing, too.

Rhubarb opened in October 2013. At that point they were our only farm relationship. So we made hay with that. I bought everything we could possibly buy from them without too much of a plan. I was committed to inserting myself into the local food economy, to being a buyer and server in that triangle with farmer/producer and consumer. As we began to grow, we began to bring in other producers, but honestly, for two years they were probably our only farm relationship. As the restaurant volume has grown, Asheville has grown. We’re sticking to our mission of being an important part of local food economy, a committed big buyer of local produce and artisanal cheese.

We are lucky in Asheville that it’s the producers who are at the core of the food scene. Restaurants may change, but I think there will always be successful restaurants because that core of producers exists. A change I’ve seen is nontraditional farmers being able to break into the business because of the demand.

AARON GRIER: Asheville 15 years ago didn’t have a restaurant scene that could lay purchasing power behind farms. When we first started out, chefs would come to market, but it wasn’t hundreds of dollars. There was an evolution of them having more volume and then the farms being able to ramp up production to supply that. When John Fleer came to town, that changed things. He really upped the game. It was inspiring for us and for a lot of other restaurants. Because of his purchasing power, we had the confidence to expand. John really helped transform our farm.

I’ve seen growth in vegetable farming in the region. Vegetable farming with restaurant support is something that could be here to stay. Tailgate markets can get rained out, but we’re still harvesting food that week. Those restaurant accounts are really standing behind us. Before the pandemic, we were selling John more produce dollar-wise in a year at wholesale prices than we were selling at our Wednesday tailgate market. That’s a big deal. It’s a rain or shine commitment.

JOHN FLEER: If I had to imagine what was different in our relationship with Gaining Ground, other than the personal, is that our approach has been to buy as much as we can manage. They’re the experts in their dirt, what they can grown, what they can harvest. I put my trust in the grower to grow what they grow best, and then the relationship works better for them. We can manage with our volume and craft to use everything they can send us.

This is something we talk about a lot with our staff. The great thing about this community is that the relationships [with farmers] are so direct. Almost all of our farmers deliver to us. You can’t really help but absorb that, when it’s not coming off an anonymous truck. If a cook checks in the order, they are talking to Anne or Aaron or the kids or one of the farm staff, or they see Evan Chender [The Culinary Gardener], or Jess Whaley [Whaley Farmstead]. None of those people are just delivery drivers.

Rhubarb would be nothing without our relationship with Gaining Ground. I will stand by that until the end of time. For this restaurant and for me, it has been critical to what we do and how and why. Despite all the foibles and hiccups and floods, this is as perfect as it can get.