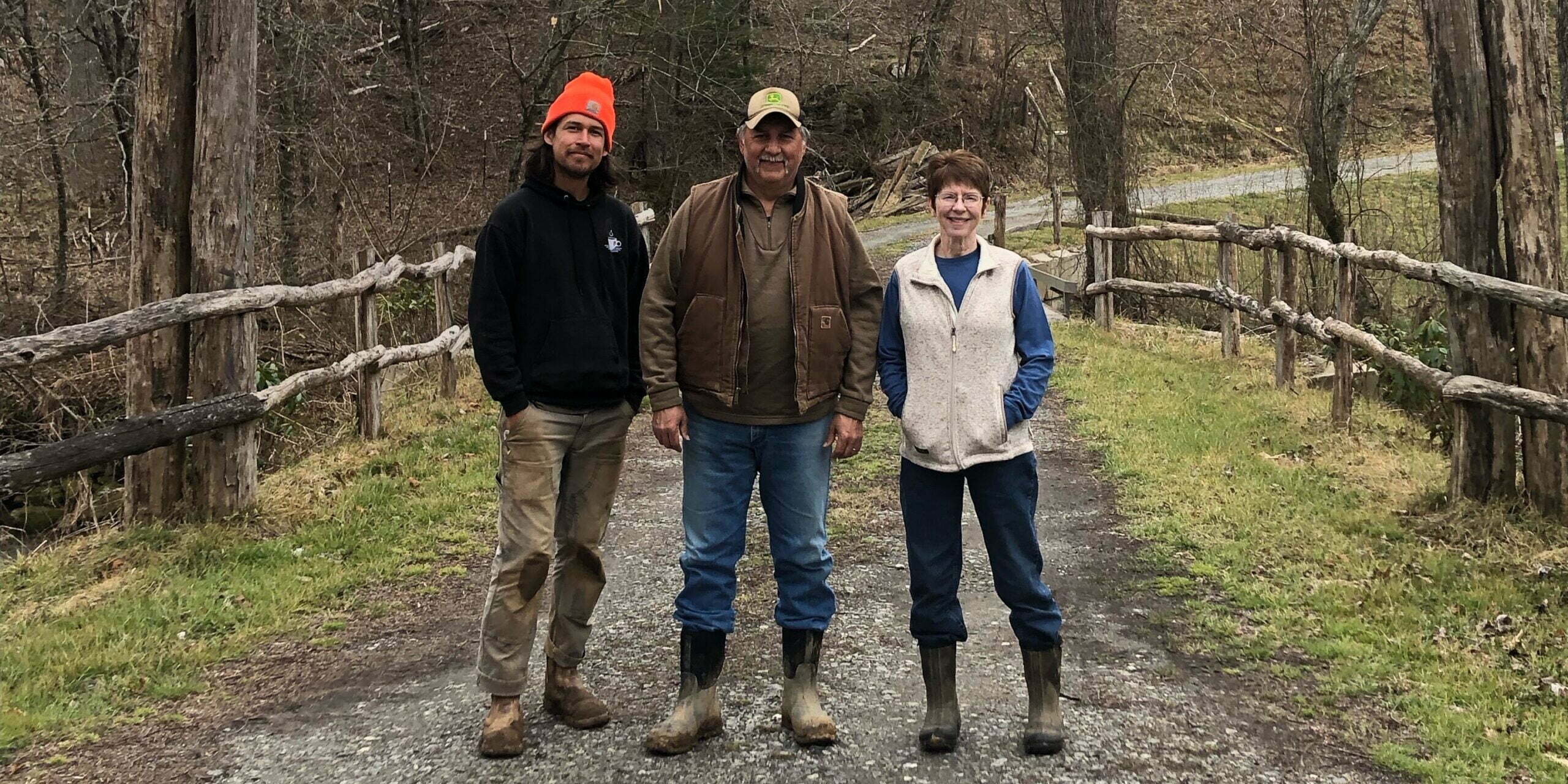 ASAP likes to share the stories of people who help us fulfill our mission. This month we talk with farmers Justin Jones of Alta Vista Farm and Mark Diaz of CrossCreek Farm. Justin moved to Asheville in late 2020 and started farming through the Southern Appalachian Highlands Conservancy incubator program. Mark and his wife, Donna, raise Belted Galloway cattle and hay at CrossCreek Farm in Leicester. Starting this season, Justin will farm on three-quarters of an acre of CrossCreek’s land.

How did this farming relationship happen?

Mark Diaz: The Haywood market is a really good collaboration center. Everyone talks to each other, gets along, and finds out what each other is doing. That’s how we heard that Justin was looking for land.

Justin Jones: Dustin of Sustainabillies—he’s the board president for the market—is always doing the rounds, checking in. I was expressing to him that I had some uncertainty with leasing an area at SAHC Community Farm in Alexander. I wasn’t sure if I was going to be able to go back for another season, and I wanted to cover all my bases and maybe find something more long term. Without having done a lot of research, I thought I might be interested in the Sandy Mush area in Leicester. Dustin said, “Oh, well, CrossCreek Farm has been interested in having people farm on their land.” I thought about it a little bit and before I reached out to Mark, he approached me at the market the next week. I went out there and we had an informal conversation and by the end of it was I was really in love with the property and the potential.

What are some ways that sharing the land is a benefit to you?.

Mark Diaz: A couple of things. One, diversifying the output of the farm. I’ve always been interested in growing vegetables, but I can’t do it myself because the cows take too much time. I’ve been helping out and it’s something new for me. It’s all interesting to me, watching how he does the netting, keeping the crops warm. There’s also security in having someone here on the farm. If you remember a few months ago, there were some barns and hay fields set on fire. If you have a situation where what’s happening on the farm, who’s going to be there, is unpredictable, that adds security. And if we go somewhere, he can help us out with the animals, or we can help with the crops. It’s mutually beneficial in that way.

Justin Jones: Just having Mark there has helped out tremendously. I’m kind of always comparing it to if I had just moved out to some property solo. He’s super responsive to any need that I have.

Have there been challenges in the transition?

Justin Jones: I’m still renting greenhouse space at SAHC, since I don’t have that here yet, so there is some coordination. I live in Asheville, so I’m always doing that circuit from Alexander to CrossCreek and back. Thankfully, there is existing infrastructure at CrossCreek, a huge barn and outbuilding. Mark’s got a tractor so we’ve been able to break ground and start doing all the field plots ready. We’re in the process of installing irrigation. We’re also looking at building a contained structure for wash and pack area.

Have you had a chance to learn about cattle farming? Was that ever something you were interested in?

Justin Jones: I’m pretty squarely in on veggies at this point. I don’t know that I would raise cows for myself, but I love it. Growing up, my grandmother had a farm and raised cows in West Virginia. Going out to CrossCreek it reminds me so much of that. I love being in that setting. I did work with a livestock farm for a few months once before. Mark shares a lot with me about the specific breed that he has. I know he wants to be able to spend more time with family. I’m looking forward to having him showing me the ropes, so I’ll be able to provide that benefit to him.

Look for CrossCreek and Alta Vista Farm at Haywood’s Historic Farmers Market this spring. Alta Vista will sell at Smathers Farmers & Public Market in Canton and to a few area restaurants, including The Swag in Waynesville.