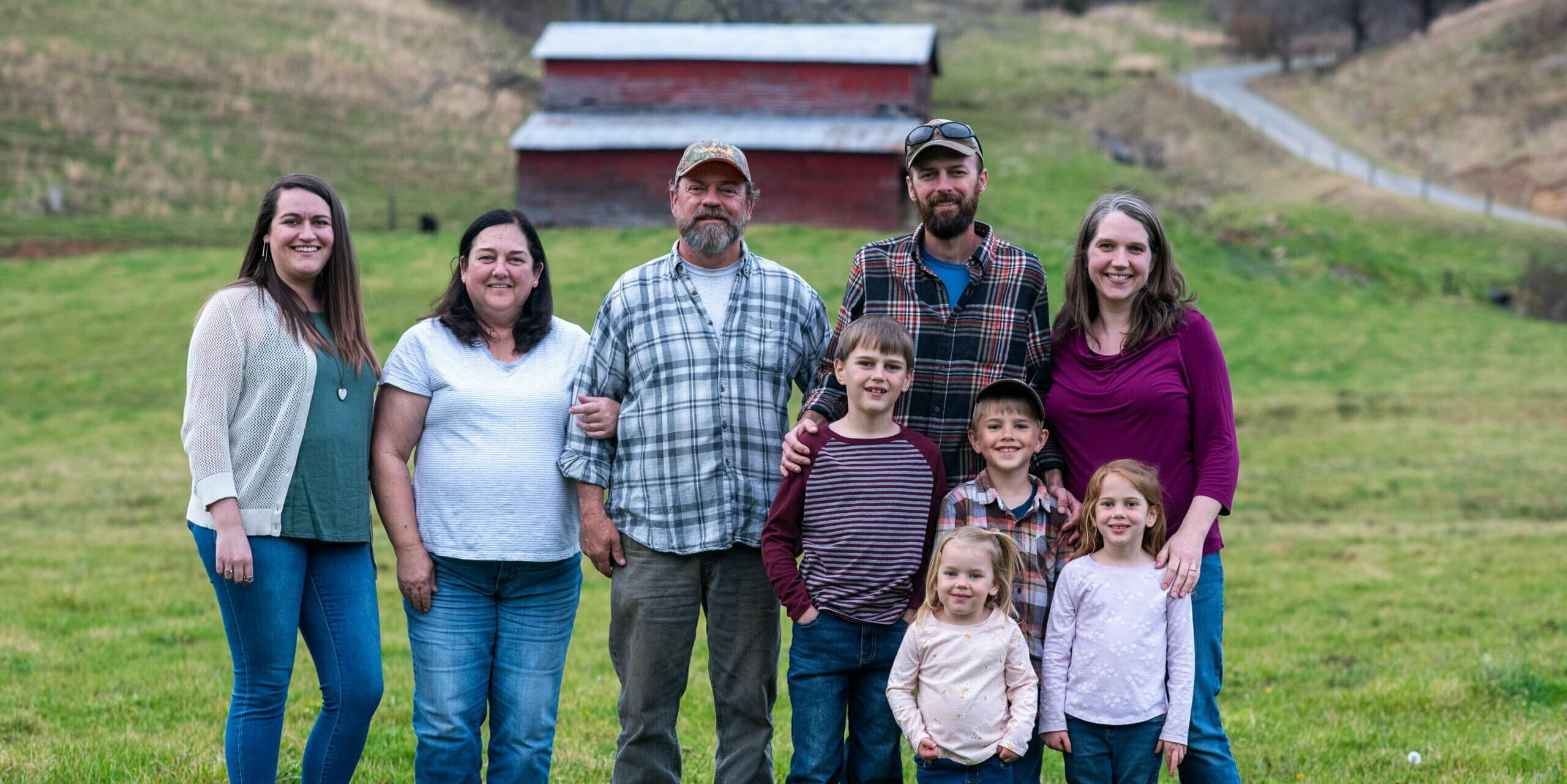 “What’s happening now with Dillingham Family Farm is what I  hoped would happen—that our children would become more  involved,” says Brenda Dillingham. “I can transition out of things  and know that the farm will continue on and that the grandchildren  will be a part of that one day. That’s really important to me.”

The Dillingham family’s history in the region dates back to the late 1700s.  Dillingham Family Farms, in Barnardsville, NC, was historically a tobacco  farm, which also produced some beef cattle and hay. These days, the land  is stewarded by the eighth generation of farmers who bring with them  new energy and ideas. That includes Brenda’s children, Justin and Jenna,  along with Justin’s wife, Emily. They are carrying on the family tradition,  but also diversifying their products, rebuilding the soil health, and  continuing to serve their community, neighbors, and family.

“In our area, a lot of people were in beef cattle,” says Justin. “They sold  them into the commodity system and then went to the grocery store  and bought beef, which is kind of crazy. But that’s what happened all  over the country. We’re still in the process, but we’d love to produce  almost everything that we consume, as well as produce a whole range of  products and sell it directly to customers, because the commodity system  is so volatile.”

Twenty years ago, Dillingham Family Farms was still growing some  tobacco, but was starting to sell grassfed beef and lamb, pork, chicken,  and eggs, directly to their community. While that shift was related to the  tobacco buyout in 2004, it was also driven by a desire to improve the  health of their land.

“We were learning more, and saw more profit potential from other  ventures, as well as the potential to improve our land, which has become  more of a focus,” says Justin. “Tillage and especially tobacco cropping was  something that had the potential to be very detrimental. But even at its  best, it was not building the soil. We’re happy to be doing other things.”

Justin always knew he wanted to farm. He says, “I’m the oldest of my  family, and so I was always helping my grandfather and father around the  farm. I’ve always loved to work outside and work with animals as well as  just be on the land. I’ve been fortunate enough to have a family situation  where it was more feasible for me than perhaps others to farm.”

Jenna says it took her a bit longer to appreciate what the family shared on  the farm. “I had more reluctance to go out and to help with the farm, but  the older that I got, the more I understood about what the farm entailed  and what it meant for our family. I’ve always had that draw to come back to the farm, and after  two corporate jobs and other  ventures, it’s become a reality.”

Emily, who manages the  website and online store, first  met Brenda at the Mars Hill  Farmers & Artisans Market,  where Emily sold baked goods.  Eventually she met Justin as  well, and they found they  shared a common dream of  farming, family, and growing  healthy food. They now  have four children, who also  participate on the farm (the  ninth generation).

“My grandpa always had beef  cattle, so I was familiar with the  idea of it,” Emily says. “I love the  way people find farming and  each other in the world.”

Emily was instrumental in  launching the farm’s website in  2018. At first it mainly allowed  a small number of customers  to preorder and select a pickup  location. But in 2020, in the  early days of the COVID-19  pandemic, it became a lifeline.

“None of us knew what was  going to happen in 2020 and  ’21, but that ended up being a  really good thing,” Emily says.  “We were already set up to do  online sales. We were really glad  to be able to offer no contact  delivery for our neighbors when  they didn’t want to or couldn’t  get out to the store or market.”

In addition to grassfed beef,  pastured pork, free-range  chickens, and laying hens, Jenna  has planted a berry patch on  the farm with strawberries,  blueberries, and blackberries.  The family is also selling value added goods like elderberry  syrup and homemade jam.

Justin says that they have had  success as a family farm because  they sell directly to consumers.  Not only is this better for the  farmer, but he says it’s better for  the consumer, too.

“Most of our customers are  people who are interested in local  food that they can trust, animals that are playing, that are healthy,  that they can actually go and look  at the field where the cow came  from and see that it truly is living  on grass, outdoors in a pasture.”