Home » Climate Change on Your Plate

An unprecedented July heat wave in California in 2006 causes the death of 70,000 poultry and more than 25,000 dairy cows.  Farmers across the Southeast suffer widespread losses during severe drought conditions in 2007. High rainfall in June 2008 causes massive flooding throughout the Midwest. Arkansas and Louisiana farmers sustain crop losses of over $1 billion dollars during Mississippi River flooding in the spring and summer of 2011. A late spring freeze following an unusually warm spring makes 2012 the worst year ever recorded for Michigan fruit growers. Record high beef prices in 2013 follow historic drought in Texas cattle country. In spring 2014, for the first time in the state’s history, California vegetable and fruit growers learn that they will get no water from Federal or State water projects as water supplies dwindle due to warmer winters and a continuing drought. Is this normal weather variability, or are we experiencing a taste of the game changing power of climate change?

The Third National Climate Assessment (NCA), released May 6, 2014, confirms that climate change is happening here and it is happening now. The report warns that the disruptions caused by more variable and extreme weather over the last decade – the warmest on record in the U.S. – are likely to increase substantially in the future unless we take action to reduce global emissions of heat-trapping gasses and to enhance our nation’s resilience to climate change.

The NCA is a periodic federal report to the nation that explains the connections between human activities, global warming and climate change. The new report describes current and future effects of climate change on seven major sectors of the U.S. economy: water, energy, transportation, agriculture, forests, ecosystems and human health. The report also explores how climate change effects are amplified through the linking of multiple economic sectors, for example water, energy and agriculture. And for the first time, the NCA focuses on adaptation planning to reduce the damages associated with climate disruption and to take advantage of opportunities created by a changing climate.

New maps in the report detail changing patterns of temperature and precipitation over the last century and clearly portray how climate change effects vary across the U.S.

While the Southwest swelters under extreme drought and heat waves, the Southeast has enjoyed average cooling and slightly increased average precipitation over the same period. The Northeast and Midwest are being hit hard by a large increase in heavy downpours and more variable rainfall patterns that sometimes cause – paradoxically – catastrophic flooding and historic drought in the same year. Coastal communities are experiencing damages associated with sea level rise such as increased tidal flooding and more damaging storm surges. 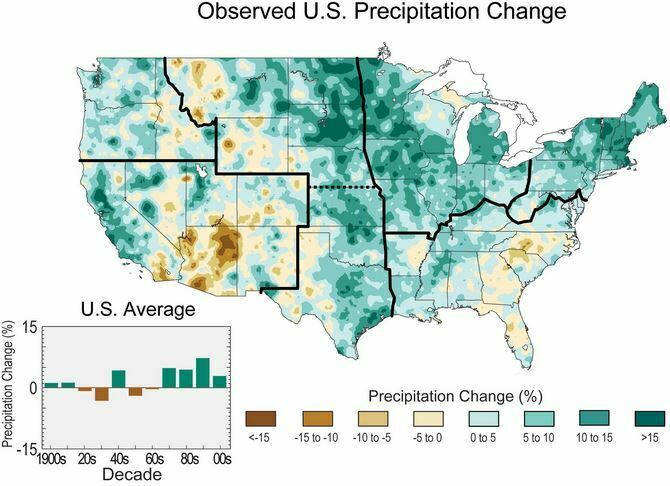 Agriculture is particularly vulnerable to climate change effects because of the crucial role that weather plays in the growth of plants and animals. The highly specialized and regionalized nature of the U.S. food system means that no matter where you live, climate change is affecting the cost, quality, and availability of the foods that you enjoy.

For example, think back to some of the meals that you had last week. Chances are good that more than 70% of the fruits and vegetables you ate were grown in the Fruitful Rim, a production region that includes the West Coast and Florida. Virtually 100% of fruit and vegetable production in this region is irrigated and climate change is disrupting the region’s water supplies in at least two ways. In the western states, melt water from winter snows is vital to the water supply. Warmer winters mean less snow and so less melt water. Higher summer temperatures and more intense heat waves increase demand and competition for water. In Florida, sea level rise is threatening fresh water supplies, while high temperatures and a growing population increase competition for water with other users such as industry and agriculture.

But climate change affects more than the fruit and vegetables on your plate. If you are a meat eater, it is almost certain that the beef, pork, or chicken that you enjoyed last week was fed on corn and soybeans. Ditto that for farmed seafood of all kinds. Climate disruptions in the Midwest have decreased grain yields over the last decade and new demand from the growing biofuels industry has increased competition for these grains. Rising grain prices have reduced profitability of poultry and pork and producers have lowered production in response. Poultry and pork producers are also struggling to keep animals cool and watered as average temperatures rise, heat waves become more common, and competition for water increases. Meanwhile, beef cattle numbers are at historic lows as ranchers reduce herd sizes in response to long-term drought in the Southwest.

The bad news is that climate change is already disrupting agricultural production throughout our nation and will likely continue to do so through the end of this century. Recall that the global climate system is slow to respond to changes in human activities. This means that even if all heat-trapping gas emissions were to stop today, global surface air temperatures will continue to warm for many decades.

The good news is that American agriculture has demonstrated a remarkable ability to adapt to social, technological, and environmental changes over the last 200 years. Farmers, growers, and ranchers across the nation are enhancing the climate resilience of their farms, orchards, and ranches by adjusting current management practices and adopting available technologies.

These incremental adaptations have helped to reduce the impact of climate disruptions on U.S. food production, but more innovative changes will likely be required to maintain agricultural productivity as climate change intensifies through mid-century and beyond. Among the more transformative changes recommended in the report include the use of sustainable agriculture practices such as building soil quality with cover crops, crop rotations and the integration of livestock into crop production systems, the development of more robust crops and livestock, and the relocation of agricultural production into regions with abundant water resources.

The report concludes with a discussion of climate change mitigation and adaptation. Mitigation seeks to slow and eventually reverse global warming through actions that reduce heat-trapping gases in the atmosphere. Adaptation seeks to reduce the potential damage of climate change through actions that enhance resilience to climate change effects. Mitigation and adaptation work hand in hand and both are needed to successfully negotiate our changing climate. Successful mitigation will give us more time to adapt, will reduce the expense of adaptation, and will enhance the effectiveness of adaptive actions. More deliberate and comprehensive programs focused on national, regional and local adaptation planning for climate resilience will be key to sustaining agriculture and food systems in the 21st century. 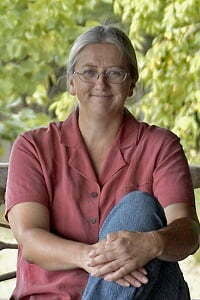 Laura Lengnick is a former member of the ASAP Board of Directors and has worked as a researcher, policymaker, activist, educator, and farmer to explore the community-enhancing potential of sustainable agriculture and food systems. She is on the faculty at Warren Wilson College in Asheville, NC and served as a lead author of the USDA report Climate Change and Agriculture in the United States: Effects and Adaptation.  Her forthcoming book, Resilient Agriculture: Cultivating Food Systems for a Changing Climate, will be published this fall by New Society Publishers.