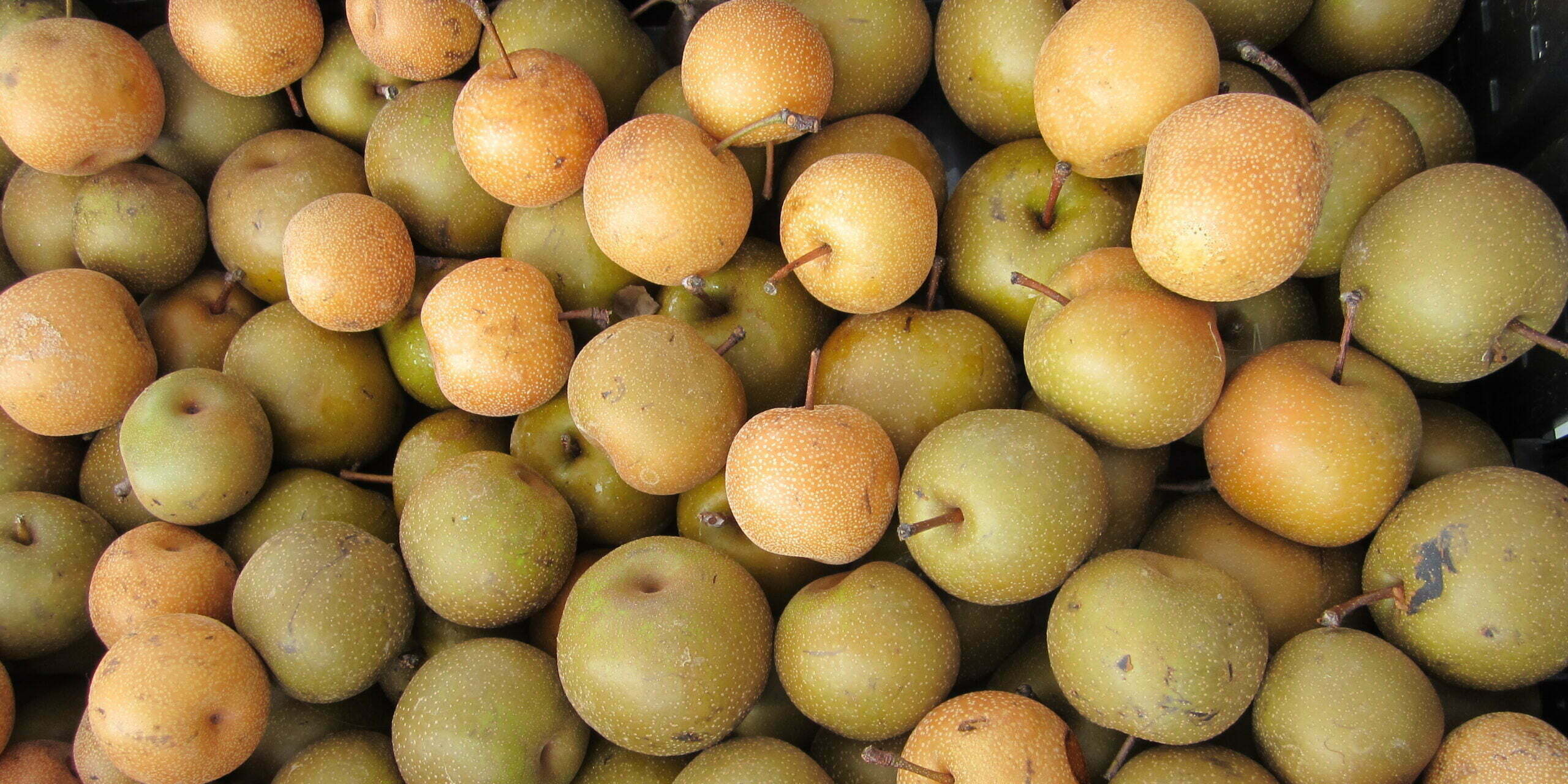 It’s officially pear season in North Carolina! Asian pears were in abundance at farmers markets this week, so be sure to grab some while they’re still around. Their sweet, refreshing flavor and crisp texture make for the perfect late-summer snack. You can find Asian pears from McConnell Farms (North and West Asheville markets), Bright Branch Farm (East Asheville Tailgate Market), and Creasman Farms (North, Asheville City, and Black Mountain markets).

This week, you can also find fresh ginger at farmers tailgate markets! Lee’s One Fortune Farm is offering whole ginger stalks, including both the young, pinkish-gold root portion as well as the dark green shoots and leaves. Make sure you get to markets early if you want to snag some ginger, as they’re in high demand and won’t last long! You can find ginger from Lee’s One Fortune Farm next week at River Arts District, East Asheville, and Asheville City markets. (Note that the Lees won’t be at Asheville City Market and Black Mountain Tailgate Market this Saturday or West Asheville Tailgate Market this Tuesday.)

Asian pears and ginger make for a wonderful flavor combination. If you’re able to get both from farmers markets this week, try making this easy Asian pear and ginger slaw! This Thai-style slaw recipe is the perfect combination of crunchy, sweet, and spicy, and pairs well with any Asian-inspired dish. In a small bowl, whisk together a half-inch knob of finely grated ginger, two tablespoons of freshly squeezed lime juice, and two tablespoons of rice vinegar.  In a separate bowl, combine two stalks of julienned celery, two peeled and julienned large Asian pears, one-fourth cup of finely chopped cilantro leaves, and two thinly sliced green onions. Stir the dressing into the remaining ingredients and serve! If you would prefer this slaw recipe with a little more spice, add in one finely chopped Thai chili pepper.

If you are looking to utilize your pears and ginger in a dessert dish, this poached Asian pear recipe is a simple way to do just that! Start by removing the cores of two large Asian pears. Slice pears about one-fourth-inch thick. In a medium pot, combine two cups of water, one cup of sugar, half of a vanilla bean (halved lengthwise, seeds scraped out), three thin slices of ginger, and the zest of one lemon. Bring to a simmer and stir until the sugar is dissolved. Add the pear slices, stir to submerge in liquid, and simmer for three minutes. Remove the pot from heat and leave to cool completely. Serve alone by drizzling some of the poaching syrup over the top, or add ice cream, yogurt, or whipped cream! If you have some leftover syrup, keep it in the fridge to add to cocktails or sparkling water for a little extra flavor!