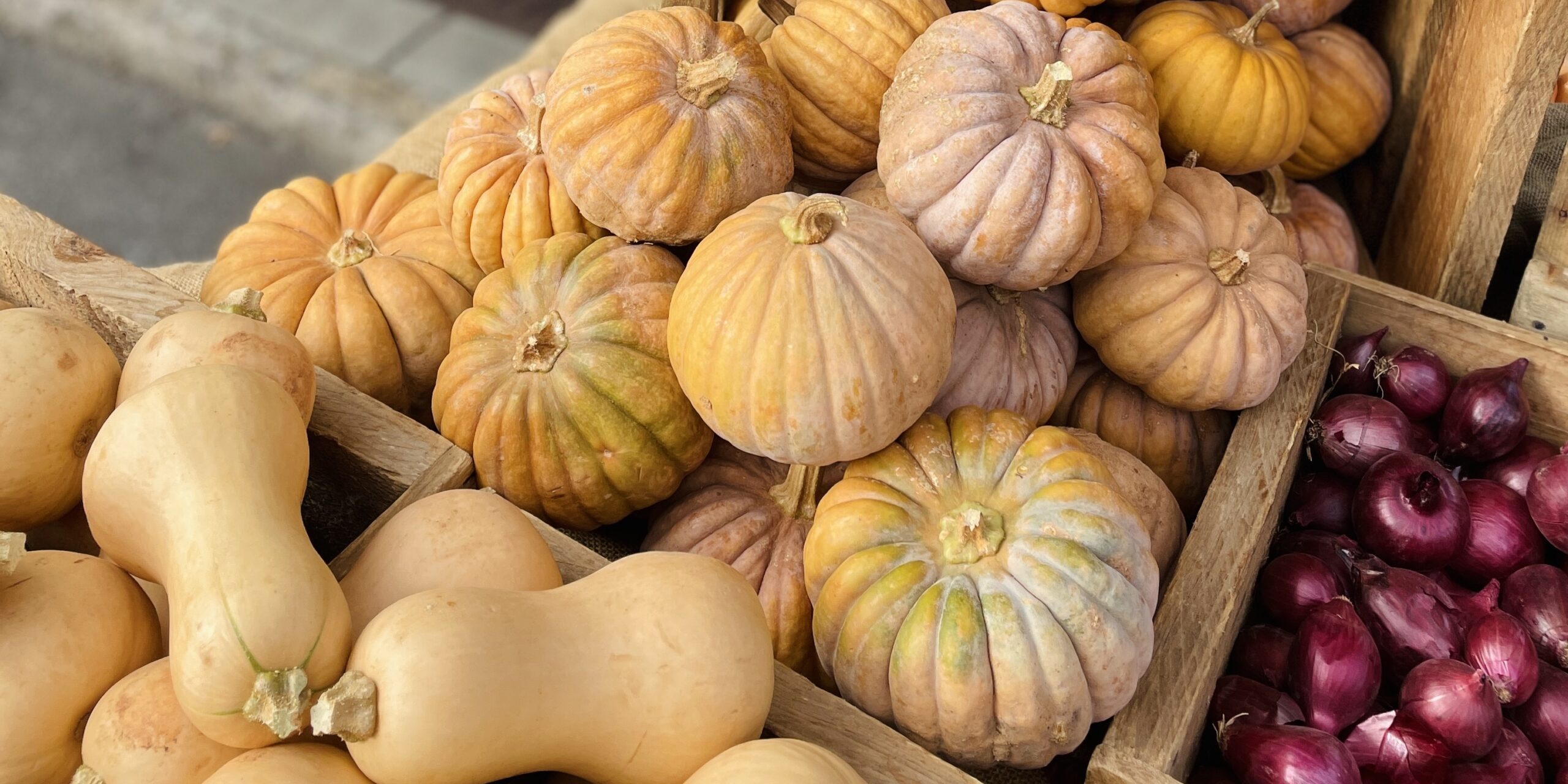 We officially entered fall last week, and what’s a better way to ring in the new season than with delicious seasonal flavors from our local farmers markets! This week, you can welcome the cool temperatures and changing leaves with fall favorites such as apples, pumpkins, ginger, winter squash and more.

Pumpkin is a fall essential for many. Whether you roast it, bake with it, or carve it, you can’t beat a fresh pumpkin from your local farmers market! Try making this creamy vegan pumpkin dish for an easy and satisfying dinner next week. Start by cooking eight ounces of your pasta of choice, drain and set aside. While your pasta cooks, bring a large skillet over medium heat, then add one tablespoon of olive oil and two cloves of minced garlic to the pan. Cook until fragrant, then whisk in two tablespoons of tomato paste, one cup of pumpkin puree, and two tablespoons of coconut milk. Add one cup of vegetable broth, a pinch of ground nutmeg, and salt and black pepper to taste. Stir to combine and cook on low for about five minutes. Add two cups of chopped spinach, and cook until wilted. Stir in your cooked pasta, and add chopped walnuts and parmesan if desired, and serve! You can find pumpkins from Velvet Morning Farms and Olivette Farm at Asheville City Market and Flying Cloud Farm at River Arts District Farmers Market and North Asheville Tailgate Market.

Not sure how to make pumpkin puree from scratch for this recipe? No worries! Pumpkin puree is an essential ingredient to many fall-inspired cooking and baking, and when made fresh can make any recipe so much better! Cut two or three small pumpkins in half, and scoop the seeds and pulp from the center, then set the seeds aside. Place your pumpkin halves on baking sheets, and bake at 350 degrees for 45 minutes until tender. Peel the skin off pumpkins and discard, then blend pumpkin insides in a food processor or blender. This works best by adding a few chunks at a time, and pulsing until the pumpkin is smooth. Add a few tablespoons of water if pumpkin puree seems dry.

Don’t throw out the seeds of your pumpkin quite yet! Roasted pumpkin seeds are super easy to prepare, and are not only delicious, but loaded with nutrition as well. After scooping the seeds out of your pumpkin, place them in a colander and rinse away any pulp. Transfer the cleaned seeds to a towel and pat dry. In a large bowl, toss seeds with two to three tablespoons of melted butter and a few teaspoons of salt. These also taste great with a little ranch seasoning, taco seasoning, or cinnamon sugar. Spread seeds on a baking sheet and bake for 20 to 25 minutes, stirring occasionally until golden brown.

There’s nothing like a warm fall drink during these fall cool evenings. McConnell Farms is now selling delicious, freshly pressed apple cider at North Asheville Tailgate Market. In a large pot over low heat, try adding a half gallon of their cider to a large pot, then throw in a few cinnamon sticks, one fourth cup of real maple syrup, six whole cloves, and the peel of one orange and one lemon (cut into strips). Stir and heat for at least 10 minutes until the cider is hot, but not boiling. Remove the spice bundle, and enjoy. Not only will these additions to your cider make for a tasty drink, but your home will smell great as well!