Local food sales in the Appalachian counties of Western North Carolina have grown significantly in the last five years. The 2012 Census of Agriculture, released on May 2, shows that direct sales alone have increased by nearly 70% in the region, from under $5 million in 2007 to over $8 million in 2012. The 2012 Census of Agriculture also shows that the region has reversed a disturbing trend in loss of farm acres, actually adding over 10,000 acres between 2007 and 2012 while the rest of North Carolina and the country lost farmland.

For over a decade ASAP has worked to build demand for food grown by local farms through many programs and products, such as the Local Food Guide, Appalachian GrownTM certification and branding, and an annual Farm Tour. ASAP started in the mid 1990s in anticipation of the end of the federal tobacco program and with a goal of maintaining farming in the Appalachian mountain counties of North Carolina’s western-most region. ASAP’s approach to keeping farms was to connect farmers to their communities through food.

The 2012 census is a clear demonstration that this approach has worked. It has been five years since the United States Department of Agriculture released the 2007 Census of Agriculture. In that time period the local farm and food scene in Western North Carolina has undergone a visible and dramatic transformation. While continuing to shed tobacco farms, declining from over 4,000 in 1995 to fewer than 100 in the most recent census, the region has seen a significant increase in the amount of farmland and in farm direct sales. The number of farmers growing fruits and vegetables is also increasing as farmers shift from tobacco or raising cows for distant feedlots to growing food for local consumption.

ASAP’s Local Food Research Center’s own data mirrors the trends shown in the 2012 Census of Agriculture data – local food sales are growing and more and more people are seeking out food from local farms. The Center’s data shows that local farms and locally grown food are defining features of life for the people who live in Western North Carolina. In every category of local food sales there have been large increases, in direct sales outlets and across mainstream market outlets like restaurants, grocery stores, universities, hospitals, and public schools. Consumers spent over $170 million on local farm products in 2013, a 42 percent increase from the previous year.

This Census data and our research are proving that local food is an effective and successful approach to keeping farms and engaging people in where their food comes from. Local food, as demonstrated by the Census and the Local Food Research Center analysis, is more than just a trend. It is now a movement. 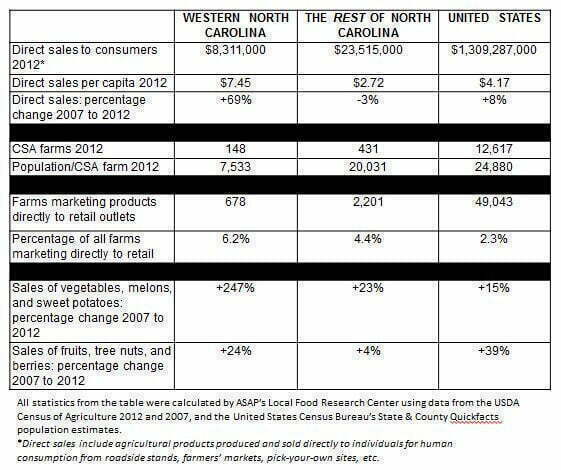