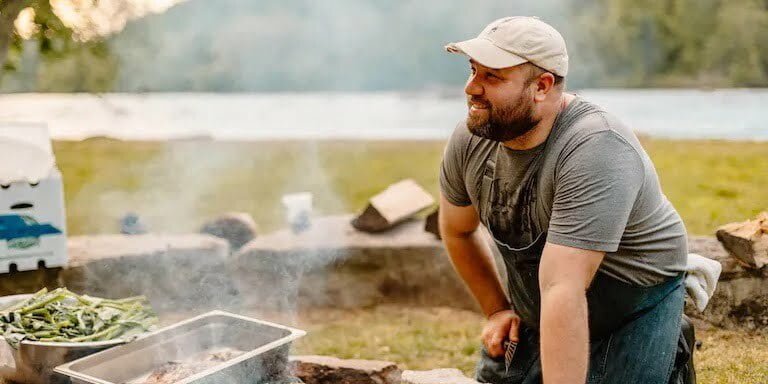 Eric Morris is the executive chef at Cultura and the Funkatorium by Wicked Weed Brewing, which was a semifinalist for a James Beard Award in 2020. Eric has been cooking professionally for over two decades, including as chef de cuisine for the critically acclaimed Nightbell in Asheville and Pearl & Ash in New York City. He served as sous chef for Tom Colicchio’s Riverpark, where he helped to establish Riverpark Farm, a portable urban farm initially built in milk crates at a 15,000-square-foot stalled construction site.

Shakshuka is an easy, satisfying meal. You can make this using all bell peppers, but at Cultura we started experimenting with using fermented peppers. It gives the dish an extra depth of flavor. We’re using aji dulce peppers from Gaining Ground Farm and Flying Cloud Farm. Aji dulce have a quality where they smell like they’re going to be really spicy, but they’re not spicy at all. So it’s not painful to eat. They have a fruity funkiness to them. That flavor works really well with the fermentation. We ferment them with a three-percent salt brine for seven to ten days.

Shopping locally from farms helps provide a stronger sense of community—and the products are always so much better than commodity. I go to markets twice a week and it’s great to develop a relationship with farmers I source from, who are all kind and caring people growing amazing food. I enjoy knowing what they’re planning to grow and what they’re excited about. Going to the market isn’t something I do just for work, but time I get to share with my family. I get to watch my four-year-old daughter be excited about eating different foods and developing her favorites. She’s an expert on local peppers!